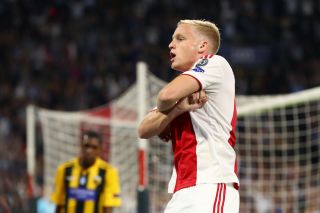 Manchester United appear to be edging closer to making their first senior signing of this summer’s transfer window as the Reds close in on Ajax’s highly-rated midfielder Donny van de Beek.

According to ESPN, Ole Gunnar Solskjaer is in pole position to secure the talented Dutchman’s services ahead of next season after he was left out of Ajax’s pre-season squad to face Eintracht Frankfurt yesterday.

As United fans across the world begin to get increasingly more excited at the prospect of signing a genuinely world-class midfielder, we thought it would be a great time to rewatch some of van de Beek’s greatest ever goals.

Sit back and enjoy.