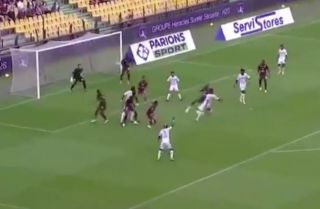 The goal turned out to be the match-winner as Monaco held on for a 1-0 away win, despite having midfielder Youssouf Fofana sent off.

United need to strengthen in central defence this summer and 19-year-old Badiashile is a player who is exciting plenty of supporters.

The Guardian report that Ole Gunnar Solskjaer is in the market for a new central defender in the summer transfer window.

And according to AS, via Sport Witness, Monaco could be willing to let the Frenchman go for upwards of €30m with United and Real Madrid interested in the teenager’s signature.

United would benefit from a left-sided centre-back to provide balance to the back four and left-footed Badiashile is one of the most highly-regarded defenders across Europe right now.