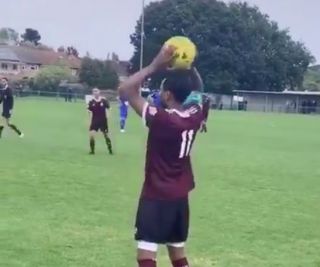 He really does love this game!

Manchester United great Patrice Evra announced his retirement from professional football in July 2019 but that doesn’t mean he has hung up his boots forever.

Evra, 39, was spotted playing for Brentham FC on Saturday afternoon, a club who play in the Middlesex County League which is the seventh step of non-league football.

The Frenchman was filmed playing on the left-wing for the London-based outfit, and wore the number 11 shirt synonymous with Ryan Giggs, which he later acknowledged in a tweet thanking Brentham for allowing him to play.

Unfortunately, Evra could not influence a positive result as Brentham were defeated 3-2 by North Greenwood United in West London.

It’s certainly not every day you come up against a five time Premier League winner at this level on the football pyramid!

Evra made 379 appearances during his trophy-laden eight year spell at United and remains one of the most loved ex-players within the fanbase.

See the clip of Evra in action below:

Thanks for letting me playing with you guys .. such a good day , don’t worry Giggsy I honored your number the best I could 😉 https://t.co/ivADOujJTn

The one and only @Evra played today against @NGUFC for step 7 Brentham FC from the @MCFLFOOTBALL Our hosts won the game 3-2 but we were very satisfied with our performance. Brentham goslscorers were C. Duffy and J. Nail. Thanks to @Evra and @jordanrocca 👏👏👏 pic.twitter.com/Z0kZDRqM5e