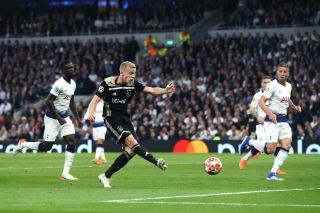 Manchester United are reportedly on the verge of signing Ajax’s Donny van de Beek after reports this evening emerged suggesting the Dutchman had agreed personal terms until 2025 and that United are expecting a bid of around £35m to be accepted without the need for negotiations.

van de Beek, 23, has been a constant source for speculation as reports began gathering pace over the weekend which suggested the talented midfielder was set to depart the club he has spent the last 20 years at, as per The Mirror.

As the exciting story began to accelerate, leading journalist Fabrizio Romano broke the news earlier this evening that the midfielder had agreed personal terms with Until until 2025.

Man United are now in talks also with Ajax to sign Van de Beek immediatly after the first official bid to be submitted tonight (around €40m). Man Utd are confident to complete the deal at the start of next week – agreement close to be done as @MikeVerweij reported. 🔴 #MUFC

However, despite how quickly this story developed, it perhaps wasn’t as straightforward as United fans may have thought as a recent report from The Mirror claim that Jose Mourinho’s Tottenham Hotspur tried to scupper United’s plans with a last minute bid to try and snatch van de Beek away from Old Trafford.

It appears that Spurs’ last ditch efforts have proved to be unsuccessful as van de Beek edges closer to being officially announced as United’s first senior transfer of this summer’s window.