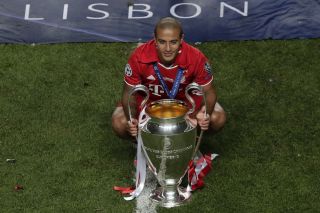 Manchester United are being linked with a move for Bayern Munich midfielder Thiago Alcantara, with noise coming from Norway.

Fredrik Filtvedt is deemed a “well connected Norwegian journalist” with a big “hit-rate” when it comes to Manchester United news, as per former Premier League player Jan Aage Fjortoft who regularly posts transfer news on Twitter.

Last season we saw Bruno Fernandes added to our midfield which made a huge difference. Ole Gunnar Solskjaer should now look to add more quality to his ranks and signing Thiago would certainly be a step in the right direction.

There isn’t a lot of depth in midfield and the drop in quality after Nemanja Matic, Paul Pogba and Fernandes is huge and part of the reason we struggle with consistency throughout the football season.

Well connected Norwegian journalist reporting that Man UTD are in for Thiago as well.

Fredrik has had a big “hit-rate” on Manchester United – news.

The two old rivals battling for Thiago. And CEO at Bayern expect an offer the coming days. This could be an BIG week https://t.co/05oKgj2qWy

Rather interestingly, Fjortoft took to Twitter again earlier this morning along with German reporter Christian Falk, with the former claiming a deal is ‘getting closer’ for Thiago to join Premier League champions Liverpool.

Also included in the tweet is a quote from Karl-Heinz Rummenigge (via Falk), who says Bayern expect an offer for Thiago soon.

It’s getting closer.
Thiago wants to play in the Premier League.
Liverpool the big favorite.
Could another PL-club try to hijack the deal..? https://t.co/F6SZuIQfQM

Though, he dropped a hint that Liverpool’s pursuit could be hijacked.

That’s where United could come in!