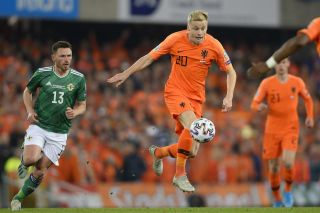 Manchester United appear to be closing in on their first signing of this summer’s transfer window.

The Guardian report that the Reds are now hopeful of securing the signing of Ajax midfielder Donny van de Beek who is available for around €40m.

Van de Beek rose to prominence by playing a key role in Ajax’s remarkable run to the Champions League semi-finals in 2018/19 and is now considered one of the best young midfielders across Europe.

La Liga giants Barcelona and Real Madrid are believed to have held an interest in Van de Beek but United appear to have stolen a march on their rivals in the race to sign the Dutch international.

The Guardian state that United have been in touch with Van de Beek’s agents and are confident of concluding a deal to their fantastic relationship with goalkeeping great Edwin van der Sar, who is chief executive at Ajax.

Meanwhile, the report also notes that United are in the market for a new central defender.

Ole Gunnar Solskjaer ideally requires an elite left-sided centre-back who can immediately make his way into the starting eleven.

But options seem few and far between in this summer’s transfer window and it remains unclear who United are looking to bring in to strengthen the key area of weakness.

Monaco youngster Benoît Badiashile, valued on Transfermarkt at £18m, is the player plenty of fans would like to see at Old Trafford next season.