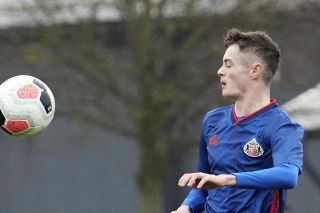 Manchester United have reportedly been given the go ahead to sign Sunderland youngster Joe Hugill after the Reds beat arch-rivals Leeds United to the striker’s signature.

Hugill, 16, was set to sign for United on a split-contract earlier this year as originally reported by Football Insider’s Wayne Veysey which would see him secure a an initial six month scholarship deal which would automatically convert into a professional deal upon his 17th birthday in October.

Due to COVID-19 postponements, the professional part of the deal had taken somewhat of a back seat, however, it now looks soon to be completed after reporter Alan Nixon who works for The Sun issued a tweet earlier stating that the FA had given the green light for the deal to be finalised.

Man U. Got all clear from FA on signing of young striker Hugill from Sunderland. Had been held up for a bit because done during lockdown. All good now.

It is also believed that United’s youth recruitment fended off competition for the highly-rated forward from the likes of Wolves, Leeds United and Tottenham Hotspur.