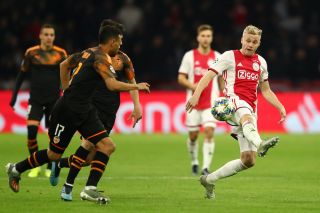 The 23-year-old was left out of Ajax’s squad for a friendly with Eintracht Frankfurt on Saturday.

Ajax manager Erik ten Hag admitted that the player was left out because of developments over his future.

Van de Beek has featured in United gossip columns since January — along with the likes of Jack Grealish and Jadon Sancho — and the rumour mill is alive and well now that the summer transfer market is open.

Some rumours suggested Van de Beek would be en route to Camp Nou this summer after former Netherlands coach Ronald Koeman was given the Barcelona job, as per Marca.

However, that does not seem to be the case with ESPN suggesting United are ahead of the queue for Van de Beek’s signature.

Manchester United will see Van de Beek as a good opportunity in this transfer window. He is in the right age bracket (23), wants a move from Ajax and the price shouldn’t be extortionate.