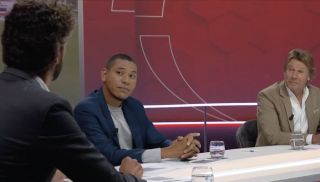 Ajax midfielder Donny van de Beek appears to be edging closer to Man United as the Reds are reportedly in pole position to secure his services. However, a strange development has come out of Holland as FOX Sports journalist Jan-Joost van Gangelen claims Tottenham Hotspur could be more likely to sign the midfielder.

According to a recent report from ESPN, the Dutch midfielder is on his way to United as the Reds emerge as front-runners to land the versatile 23-year-old.

The Mirror also claim that van de Beek has been persuaded by Ole Gunnar Solskjaer to join the Reds and become a vital part of a Premier League winning team.

However, contrary to the wide spread reports suggesting that van de Beek to United is all but done, Dutch press have recently claimed that Spurs have emerged as a shock contender to rival United for the 23-year-old’s signature.

It goes without saying that football is a funny ol’ game and especially when it comes to transfers it’s never over until it’s over, but this random claim by van Gangelen seems to have very little weight to it; more like guess work.

It seems to be a ploy to drum up some late interest in an attempt to either up the asking price or hurry the United hierarchy along, perhaps both.