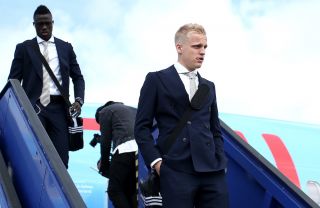 van de Beek, 23, looks set to depart the club he has been with for the last 12 years with Ole Gunnar Solskjaer’s Reds as the red hot favourites to be his next destination, as per ESPN.

The 23-year-old versatile midfielder impressed yet again last season after being directly involved in 14 goals from 23 domestic matches for Ajax before their season was cut short due to the ongoing COVID-19 pandemic.

van de Beek’s consistently impressive form has seen him become one of Europe’s most sought after talents with the likes of Real Madrid, Barcelona and United all among the list of potential suitors.

However, according to Dutch outlet AD it is United who are set to win the race for van de Beek’s signature after they claim that his ‘dream move’ is to join United and that it will happen soon.

The outlet claim that van de Beek’s desire to join the Premier League was the reason he did not sign for Spanish giants Real Madrid last season.