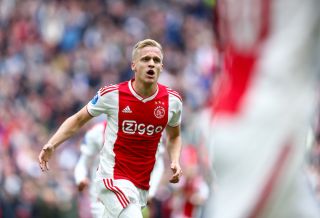 News surrounding Van de Beek’s future has escalated in the last 24 hours with the Dutchman almost certain to leave Ajax and United said to be the frontrunners in the chase for his signature.

The 23-year-old was left out of Ajax’s squad for Saturday’s friendly against Eintracht Frankfurt due to developments regarding a transfer,  as per BBC Sport.

And according to Spanish publication Sport, Van de Beek has now told Ajax teammates he is set to leave the club with Old Trafford his chosen destination.

The report claims Van de Beek’s decision has come as a huge blow to Barcelona, with new manager Ronald Koeman targeting the player he managed at international level as part of his Nou Camp rebuild.

Instead, United appear to have capitalised on the midfielder’s uncertain future and Sport even claim a deal could be finalised next week.

Van de Beek is a versatile player who shone on the big stage in Ajax’s remarkable run to the Champions League semi-finals in the 2018/19 season.

He can operate in a holding role, but can be best utilised in a box-to-box role where he is effective with relentless energy and proficiency at both ends of the pitch.

We await more concrete evidence that Van de Beek is closing in on a move, but there are certainly positive signs of progression in what has been an incredibly frustrating transfer window so far for United supporters.