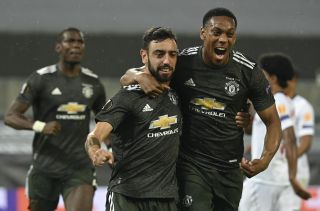 Wes Brown is tipping Anthony Martial for Manchester United Player of the Year ahead of Bruno Fernandes.

The Frenchman scored 23 goals and made six assists for the Red Devils last term as Ole Gunnar Solskjaer’s side finished third in the Premier League and reached the semi-finals of the Europa League, FA Cup and League Cup.

Manchester United started the season after the sale of Romelu Lukaku and no striker was brought in to replace the Belgian. The manager left it up to Martial as well as Marcus Rashford to prove themselves and that’s exactly what both players did.

Fernandes also impressed following his January move from Sporting Lisbon, contributing eight goals and seven assists in his 14 Premier League appearances. He was an instant bonus to the side and helped everyone around him to perform.

‘I thought he stepped up this season and I love it when he smiles because that means he’s scoring! We need to see more of that.

‘If Bruno had maybe got here a little bit earlier, it would 100 per cent have been him. I’ll stick with my guns and say Anthony Martial.’

Martial, formerly of AS Monaco, finally showed that he can score goals at a consistent level last season. He is expected to build on that again when the Premier League resumes and it’s great to see him get back in the France squad for the upcoming Nations League fixtures.

Former United player Danny Webber added: ‘Martial main player and I’ll stick with what Wes said there. If Bruno had come in earlier I’m sure he would have been in.’

Brown added that he wants to see both Jadon Sancho and Dean Henderson at Old Trafford next season.

‘We’ve got some young, exciting attacking players but Sancho would be another layer of the cake. He’s exciting, he’s young, he can score goals and is good with assists.

‘If they can get that done it would be perfect. United can always improve. The defence, midfield; the more competition going on all over the field, the better the team becomes.

‘I would bring Henderson back. He was excellent at Sheffield United last season.

‘All positions need competition and Henderson has proved he is more than capable of playing in the Premier League.

‘Henderson will want to come back to Manchester United and prove to Solskjaer he should be number one. Competition is good for morale and will get both players playing at the top of their game.’