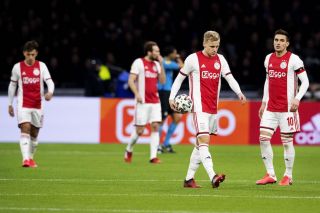 Ajax’s Donny van de Beek is reportedly open to joining Barcelona or Manchester United but is keen to learn the future of world number-one attacker Lionel Messi before making a final decision on his future.

Van de Beek, 23, looks set to be the next big name to depart the Dutch champions despite enjoying yet another impressive season in Amsterdam.

The young midfielder was directly involved in 14 goals in 23 domestic appearances in the Eredivisie last season and has since drawn the interest of the likes of Barcelona and United.

According to Sport, the midfielder is open to a summer move to Barcelona but is waiting to learn the future of star-man Messi before making a definitive decision.

van de Beek has been heavily linked with a move to Ole Gunnar Solskjaer’s Reds which have been intensified due to Ajax CEO Edwin van der Sar’s previous connections to the club, as per Sky Sports.

However, the latest development in the ongoing uncertainty surrounding the 23-year-old is that he will wait to see where Messi ends up before committing his future to Barcelona or anywhere else.