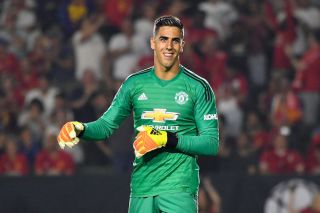 Manchester United have announced that back-up goalkeeper Joel Pereira has joined Huddersfield Town on loan for the 2020-21 season.

Pereira, 24, joined United back in 2015 but has only managed to make three first-team appearances. The goalkeeper will now join Huddersfield Town in time for next season and what will be the sixth club in his career to take him on loan.

United announced the loan move had been finalised on their club website ManUtd.com in a week which saw fellow keeper Dean Henderson sign a new bumper five-year £120,000-a week deal, as per Sky Sports.

Pereira’s loan move will see him ply his trade in the Championship next season as he continues to try and become a consistent part of United’s first-team.

The young goalkeeper will be keen to impress on his latest temporary venture after speculation increasing that current back-up keeper Sergio Romero could depart the club, as per Metro.

Pereira’s temporary employers will be hoping the young Portuguese keeper can help the side to win promotion back to the big time after enduring their second consecutive season in England’s second tier.