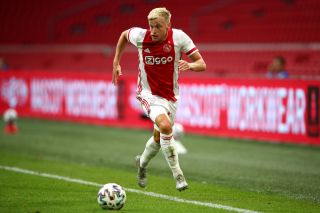 Manchester United are reportedly favourites to sign Ajax midfielder Donny van de Beek after manager Ole Gunnar Solskjaer told him he wants him to be a big part of turning the Reds into Premier League winners.

According to The Mirror, United are now in pole position to land the Dutch international after Spanish giants Real Madrid and Barcelona failed to follow up on their initial interest by launching official bids.

The Mirror’s report also states that the Dutch midfielder has told chief executive chairman Ed Woodward that he will not play for current club Ajax again.

The star’s future was thrown further into doubt after he was left out of his side’s pre-season friendly match against Eintracht Frankfurt earlier today.

It is understood that the only way United will miss out on signing the player is if there is a last minute bid from either Spanish clubs.

The midfielder is believed to be available for a modest £40m and it is expected that Solskjaer will continue talks with the player over the next 48-hours which would make him the Red’s first-team signing of the summer.

Read more: Video: Tahith Chong gets off to a flyer in Germany with great finish after strong run