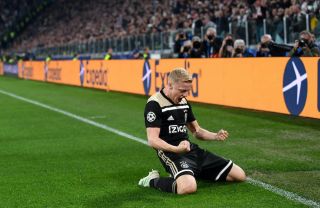 Ajax midfielder Donny van de Beek was not included in his side’s pre-season friendly earlier today against Eintracht Frankfurt sparking more speculation he could be on his way to Manchester United.

van de Beek, 23, could very well be the next big name to depart Ajax as his future continues to be speculated, according to Sport, the talented midfielder is open to a move to Barcelona but is keen to learn the future of star-man Lionel Messi before making a decision.

However, leading journalist Fabrizo Romano has waved that suggestion away after retweeting a post stating that van de Beek is not an option for Barcelona, which would suggest that United have a clear run at the midfielder should they wish to secure his services.

The latest in this rapidly developing saga is that the 23-year-old midfielder was left out of his side’s pre-season friendly against Eintracht Frankfurt earlier today, as per Manchester Evening News.

The Dutch midfielder was picked for his side’s earlier games against Hertha Berlin and Red Bull Salzburg, but was left out of today’s game.

Ajax boss Erik ten Hag has previously publicly confirmed that his star-man’s future will lie elsewhere after this summer transfer window, as per Het Parool via Manchester Evening News.