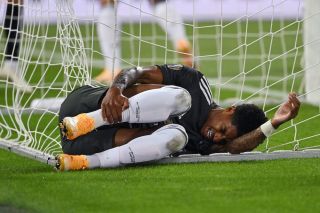 Marcus Rashford is a doubt for England’s Nations League double header against Iceland and Denmark next month.

Gareth Southgate is likely to be without the 22-year-old as he continues to suffer with an ankle injury that he sustained during Manchester United’s Europa League semi-final defeat against Sevilla, as per The Telegraph.

The report adds that he played through the pain in Lisbon to be in contention for Southgate’s squad – but realistically, I doubt that was on his mind when there was a place in the Europa League final up for grabs.

It is in United’s best interest to ensure Rashford rests ahead of the start of the Premier League season. An injury free campaign would be perfect for England too, with the European Championships rescheduled for next summer.

Mason Greenwood, who was called up ahead of Aston Villa playmaker Jack Grealish, could use this as an opportunity to show his worth for the Three Lions.

Rashford needs to take care of his ankle injury because he spent a significant chunk of last season out injured with a serious back injury. He won’t want a repeat of another long-term spell in the treatment room.