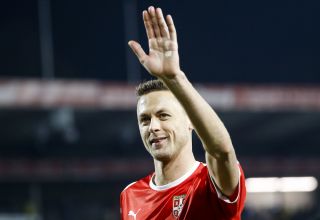 Matic, 32, has called time on his international playing career after making 48 appearances in all international competitions for Serbia.

The experienced defensive midfielder had hoped to feature for his country in this year’s Euros before it was postponed until next year due to the ongoing COVID-19 pandemic.

Serbia will play Norway in a Euros playoff semi-final on October 8, elsewhere, Scotland take-on Israel with the winner set to face-off against either Serbia or Norway in the play-off final on November 12.

Matic’s international retirement comes shortly after it was officially announced that he has extended his contract with club United until 2023, as per ManUtd.com.

There is some confusion surrounding Matic’s sudden international withdrawal, as FFS sporting director Vladimir Matijasevic, as quoted by Sky Sports said: “Other than saying it was time for younger players to take over, Matic did not state any other specific reasons for quitting.

“We respect his decision. He is 32 years old and he’s had an exerting club season. European club football is demanding and hence we are aware that we’ll have to inject fresh blood into the national team.

“We’ve got several players who are over the hill and we realise that some of them may call time on their international careers in the next year or two.”

Matic is now expected to remain fully focused to his club career as up until this point, the club’s hierarchy fail to bring in reinforcements, therefore, the experienced Serbian’s leadership qualities could prove invaluable ahead of next season.