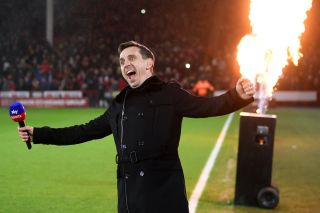 Manchester United’s televised fixtures during the first month of the 2020-21 season have been announced by the Premier League – confirmed via ManUtd.com.

It doesn’t come as a surprise that fans will be able to watch the Reds on Sky Sports and BT Sport in the first month of the season. But yeah, great, it’s not as if we can rock up to Old Trafford and stadiums afar and see the lads play.

United take on Crystal Palace on Saturday, September 19 (17:30) and it will be shown on Sky Sports.

You will also be able to watch the Reds on TV when we travel to Brighton on Saturday, September 26 at 12:30.

The first televised match of the season will be Arsenal’s trip to Fulham. That will be the match to kick off the 2020-21 campaign.

Of course, just because games aren’t televised on Sky Sports or BT Sport doesn’t mean you won’t be able to see them live. Browse the internet, pick up a Firestick device and check out streaming websites.

We can’t name any (obvious!) but they can be found easily.