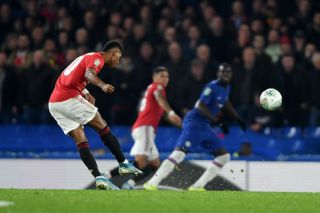 Manchester United have given fans the chance to vote for their player of the season as well as their chosen goal of the season.

Fans can vote for their Sir Matt Busby player of the season on the club’s official website ManUtd.com as well for which player scored the goal of the season.

Voters are able to chose from 27 players who featured for the Reds at some point throughout last season’s campaign.

Unsurprisingly, Marcus Rashford, Anthony Martial, Aaron Wan-Bissaka and Bruno Fernandes are all considered to be the favourites to win the award.

The list goes onto give fans a chance to pick their goal of the season winner, as quoted by Manchester Evening News, the list features the likes of Rashford’s stunning free-kick against Chelsea in the Carabao Cup and Fernandes’ superbly finished off counter-attack against Brighton.