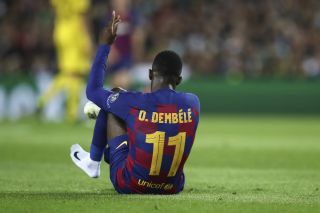 Manchester United have reportedly ‘enquired’ about Barcelona’s Ousmane Dembele, but are believed to holding off advancing talks due to their continued efforts in trying to sign number-one target Jadon Sancho from Borussia Dortmund.

Sancho, 20, has been the Red’s summer transfer priority and is understood to cost the United board upwards of £100m, as per The Times however, talks between the two clubs have so far failed to materialise.

Should the Red’s fail in their drawn-out pursuit to land Sancho, one alternative they have been linked with is Barcelona outcast Ousmane Dembele.

Dembele has fallen out of favour at the Camp Nou in recent times having only made just nine appearances in all competitions for Barcelona last season.

According to football expert Duncan Castle, who spoke on the Transfer Window Podcast as quoted by Daily Star, United are holding off advancing their interest in Dembele because of their continued stance that they’ll land Sancho.

Castles went onto explain that he feels that United are putting in all efforts to secure Sancho in time before the summer transfer window slams shut but admits that the young English talent will cost the Red’s an eye-watering £107m.