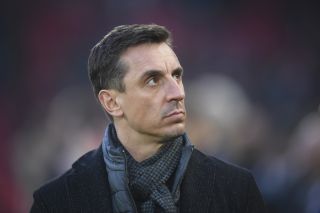 Former Manchester United right-back Gary Neville believes that current club captain Harry Maguire’s recent ordeal whilst on holiday in the Greek town of Mykonos can act as a catalyst to bring the squad closer together.

Maguire, 27, was arrested in Mykonos last week after a brawl broke out between tourists which led to him being arrested on suspicion of assault, bribery and resisting arrest, as per BBC.

The English defender was later found guilty of all charges in a Greek court, however, soon after the shock convictions Maguire’s legal team won their appeal to have the convictions overturned and a full retrial awarded.

The United captain who is now back on home-soil gave a recent interview to the BBC where he said that he feared for his life after believing he was being kidnapped by Greek officials who were wearing plain clothes.

In light of Maguire’s recent interview, United legend Neville who spoke to Sky Sports believes the captain’s recent ordeal could help the Red’s dressing room come together, he said: “Over many years I witnessed incidents, ones which I was involved in, at Christmas parties and the like where people make mistakes and do things that let other people down.

“You have to own up to those things and stand up to them because there is nothing you can do about it.

“Harry doesn’t feel like he did a lot wrong this week, he felt like he was exposed, but in moments like this you have to ask yourself if you, or the people around you, did everything possible to get away from it and whether you would put yourself in the situation again in the future.

“The only thing Harry can do is make sure it doesn’t happen again.

“I always take myself back to being sat in the dressing room where either myself, my colleagues or team-mates made a mistake. Would we stand by each other and stick up for each other? We absolutely would, 100 per cent.

“Those Manchester United players in the dressing room and the club will stand by Harry Maguire, and myself as a fan in the media will not judge him in any way, shape or form because of the reality is that these things happen in life.

“Ole Gunnar Solskjaer will think this situation is part and parcel of managing a football club and managing characters and personalities in situations that occur.

“I don’t think he will see it as an issue that would drive a wedge between him and his team, I would say it could potentially increase the bond and the spirit that exists.”

Maguire will now be keen to get back to the training pitch as he prepares to take on Crystal Palace in his side’s Premier League opener on September 19.