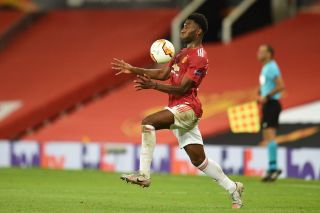 Timothy Fosu-Mensah made five appearances last season but he was one of the beneficiaries of the lockdown because it gave him extra time to recover from his ACL injury.

The Netherlands international’s cameo against Crystal Palace in July marked his first appearance for the club since 2017.

It was an important moment for the player because he’s had such a difficult time with injuries and Ole Gunnar Solskjaer made it very clear after that he preferred Fosu-Mensah over Diogo Dalot, who fans could be forgiven for forgetting he even existed.

Having just returned to the team, Fosu-Mensah knows he needs to put the work in. Loans moves to Fulham and Palace didn’t quite work out and the academy graduate now has a lot to prove at the highest level.

He’s been using his time off to work on his fitness, so he can return in top shape for pre-season, as seen below via Fosu-Mensah’s Instagram story cited by @Strettycast.

I’m still unsure if Fosu-Mensah is the answer or whether he’s good enough to be a stand in option for a side that should be competing on all fronts. The coming season will tell us that as he looks set to stay at Old Trafford and fight for his place.

Having a versatile defender in the squad is good for Solskjaer. The Dutchman can play at full-back, centre-back and I’d like to see him tested as a holding midfielder at some point too.