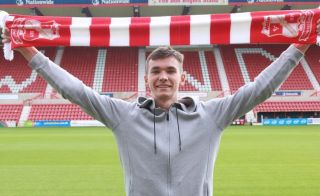 The League One side are “delighted” to announce the loan signing which is subject to EFL and FA approval.

It’s a great opportunity for the 20-year-old to go out and experience first team football. He’s already gained some of that from making United’s travelling squad for the Europa League tie away at FC Astana in November 2019.

While he’s not yet made a senior appearance for Manchester United, Kovar can prove himself by coming up the footballing pyramid on loan spells like Dean Henderson has done. Hendo signed a long-term deal with the club this week with the view of fighting for a No.1 spot with David de Gea next season. The stuff of dreams for any young goalkeeper.

At international level, Kovar has represented the Czech Republic at U-18s, U-19s and U-20s. We hope that will stand to him on his temporary journey with Swindon.

Upon signing for The Robins, the young keeper said: “First of all, I’d like to say thank you to everyone for the nice welcome, even on the training ground. Everyone has been brilliant with me since I came.

Czech out our new keeper 😏

We are delighted to announce the loan signing of goalkeeper, Matěj Kovář from @ManUtd 📝#STFC 🔴

“It was the right time to come here and get some experience in men’s football. I’m really happy the club came to me and gave me this opportunity.

“The gaffer spoke to me in a pre-season game at Manchester United’s training game and he’s a really positive guy, said he wants to play football and that’s what I’m really looking for.” (via swindontownfc.co.uk)

Best of luck to Kovar. It would be lovely to see him succeed this season.