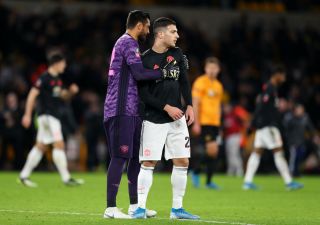 According to the Daily Star, Dean Smith’s side are eyeing the pair up this summer as they look to build on Premier League survival from last season.

Villa’s interest in Romero comes with little to no surprise. Not only is the Argentine a brilliant goalkeeper, Smith made loanee stopper Pepe Reina his first choice between the sticks last term, but he returned to AC Milan this summer and has since joined Lazio.

There’s a void that needs to be filled and with Dean Henderson returning to Old Trafford from his loan spell at Sheffield United and agreeing to new terms, it’s clear that Romero will be pushed further down the pecking order and he’s too good of a player not to be making the bench.

Dalot seen opportunities at United limited under Ole Gunnar Solskjaer and was overlooked by the manager in place of Timothy Fosu-Mensah towards the end of the season, despite the Netherlands international spending most of the season injured.

If Villa want to avoid another relegation scrap it would be a good idea to strengthen at the back. Only Norwich conceded more than Smith’s side last term.

This could present an opportunity to United to get two players off the wage book and Jack Grealish at a cut price. Meanwhile, John McGinn is another player who United could look at to improve their squad.

Think about it, Ed.