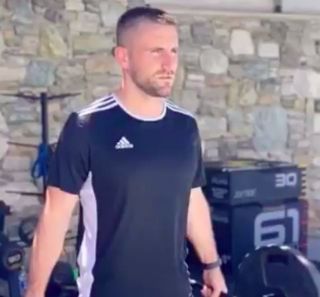 Luke Shaw has been filmed stepping up his recovery from injury ahead of the start of the new Premier League campaign which begins in under a month.

Shaw was a huge loss in Manchester United’s final games of the Premier League season and subsequent Europa League run after sustaining an ankle injury in the 2-2 draw against Southampton at Old Trafford in July.

The absence of United’s first-choice left-back highlighted his importance to Ole Gunnar Solskjaer’s system and its vital that he can maintain fitness next season.

Shaw has been doing gym work at an elite performance centre while on holiday in the Greek holiday of Mykonos, the popular holiday destination where an altercation with police led to the arrest of United captain Harry Maguire.

The facility has also been used by Shaw’s United teammate Daniel James and Arsenal full-back Hector Bellerin in the past.

Shaw completed strength building and agility-based exercises as he aims to return in good shape for the start of the new domestic campaign.

Ole Gunnar Solskjaer’s players are expected to return for pre-season training next week and face Crystal Palace at Old Trafford in their opening game of the season on September 19.

Watch Shaw step up his recovery below in a video posted by ManUnitedZone:

Luke Shaw steps up his recovery from injury 💪🏻🔴#MUFC

READ MORE: Highly-rated Man Utd youngster closing in on loan move to League One side