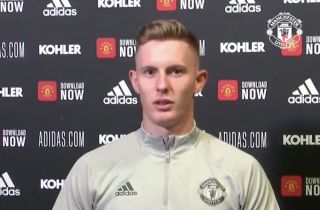 Manchester United goalkeeper Dean Henderson has spoken out about his new five year with an optional extra year contract with the Reds.

The 23-year-old keeper has spent the last two seasons out on loan with Chris Wilder at Sheffield United, however, United have since recalled him and awarded his talent with a new long-term deal which will see him rival David de Gea for the club’s number-one jersey.

Henderson’s new deal was confirmed yesterday, as per Sky Sports, who also claim that the young Englishman will earn around £120,000-per week, making him one of the best paid goalkeepers in the Premier League.

Speaking in light of his new deal, Henderson has said it’s ‘a dream come true’, the youngster also drew attention to his parents who have always been aware of his ambition to make it at United.

💬 “I’m absolutely delighted. It’s something I’ve been working towards for a few years now.”