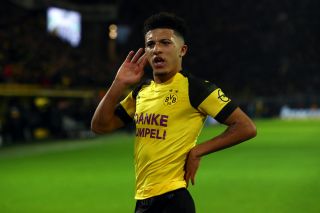 Manchester United’s pursuit of Borussia Dortmund’s Jadon Sancho is reportedly back on after it has been claimed that the 20-year-old attacker still believes the transfer will happen this summer.

Sancho has been relentlessly linked with a ground-breaking switch from current club Borussia Dortmund to United in a transfer believed to cost upwards of £100m, as per The Times.

The young English attacker has been Ole Gunnar Solskjaer’s number-one summer transfer as the Norwegian looks to bolster his wide attacking options.

Despite United’s interest, talks between the two clubs appeared to breakdown earlier this summer when Dortmund sporting director Michael Zorc issued a no-nonsense statement that their star-player will remain at the Black and Yellows next season, as per Sky Sports.

However, the latest twist in the Sancho-saga appears to be that the proposed transfer which would be a new British record is not quite over yet.

Leading transfer expert Ian McGarry spoke on the Transfer Window Podcast, as quoted by Express and said: “Our information is that Manchester United and Borussia Dortmund are comfortable with the positions they’re in with regards to selling Sancho.

“United don’t expect Dortmund to agree the details of the payment structure that United have proposed, until potentially the end of the window.

“There’s currently an impasse with conversations between the two clubs.

“United are now in the unique position of being the only team in town as far as Sancho is concerned.

“That’s something they’re comfortable with.

“It shouldn’t be the case that the transfer is in doubt or won’t happen.

Don’t get too excited United fans, but all the signs coming from the experts is that Dortmund’s public stance is nothing more than hidden negotiation tactics directed at the United hierarchy.

Read more: Opinion: Why Man United and Jack Grealish are a match made in heaven but may never get together