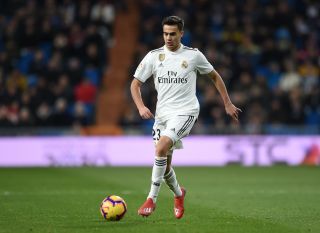 Reguilón, 23, has spent the season on-loan with Europa League winners Sevilla and has enjoyed a highly impressive campaign having grown into his role which saw him become a key member of Julen Lopetegui’s side.

According to Marca via Sports Witness, the young full-back has no future back at parent club Real Madrid and is set to leave the club on a permanent basis this summer.

The young Spaniard thoroughly impressed throughout last season, most notably in the Europa League where he had a hand in two goals in just five appearances and is understood to now be a target for a host of top clubs.

The report states that alongside Leicester City the likes of Juventus, Inter Milan and Tottenham Hotspur are also monitoring the attacking full-back’s situation.

However, it has been claimed that United have ‘taken an interest’ in the young talent who is understood to be available for a modest £18m – £22m.