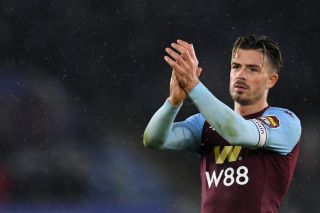 Manchester United have been relentlessly linked with Aston Villa’s club captain Jack Grealish throughout large parts of this year, however, a deal seems increasingly unlikely to materialise as the Reds remain one of the league’s only clubs not to spend in this summer’s transfer window.

Grealish, 24, helped his boyhood side Aston Villa retain their Premier League status after his final-day goal heroics against West Ham United won his side a vital point which sealed the relegation fate of both Watford and Bournemouth alongside Norwich City.

The highly-rated attacking midfielder enjoyed an impressive campaign last season after being directly involved in 14 goals in 36 matches and was widely regarded as the club’s best player.

Grealish is reportedly valued at £80m, as per Daily Mail and it is understood that the Villa captain will only be allowed to depart the Midlands club should a bid within that region be received.

However, speculation surrounding the exciting attacker’s future was intensified earlier this year when Grealish’s agent Jonathan Barnett spoke exclusively to Stretty News and revealed that he believes Champions League football would benefit his star-man.

Barnett’s sentiment has been best echoed recently after England manager Gareth Southgate announced that he will not be selecting Grealish for his latest England squad, as per Sky Sports.

United are unlikely to open the cheque book and meet Villa’s £80m valuation for Grealish, but with such inactivity in this summer’s transfer window so far, should the Reds go all out for the talented Englishman?

Having said that though, Grealish displays some stunning attributes, most notably in his ability to carry a ball and draw opposition players in before rolling them and influencing them to foul him.

Prior to Bruno Fernandes’ arrival back in January, United really lacked a player capable of operating in tight spaces who can exercise intricate technical plays and those areas are exactly where Grealish’s game comes to life.

Having showcased versatility within his game to function as either a wide playmaker or a more traditional number 10 situated behind the front-man, Grealish would undoubtedly add an exciting element for United’s interchanging front four.

However, despite the attractive prospect of adding the talented Grealish to United’s firepower, it is hard for fans to envision Grealish wearing red after the club seemingly refuse to spend a touch more on number-one target Jadon Sancho.

With the United faithful becoming more and more frustrated by the day with their club’s transfer market inactivity the pressure really is on the Red’s hierarchy to make a statement signing or risk being left behind by their domestic rivals.

Would Grealish and United compliment each other? Absolutely.

Are the club’s likely to come to an agreement? Probably not.