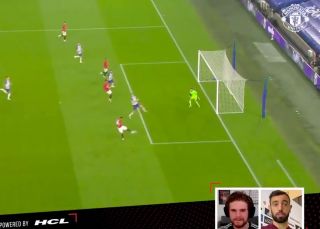 The goal in question was the electric counter-attacking third against Brighton at the Amex Stadium to top off an accomplished performance.

United were crushing teams with the frightening quartet of Fernandes, Mason Greenwood, Anthony Martial and Marcus Rashford for a short period after the restart and blitzed Brighton with some exhilarating football.

Greenwood bides his time before picking out Fernandes at the back post who does the rest after superb runs from Rashford and Martial.

Fernandes has discussed his thought process behind his movement for the goal in conversation with Statman Dave for the club’s brilliant Box to Box series.

The Portuguese playmaker describes how to capitalise when having a man advantage on the counter-attack, cleverly holding his width while the opposition left-back drifts inside.

This was Ole Gunnar Solskjaer’s Manchester United at their scintillating best.

Listen Bruno and Statman Dave talk about the goal below, via ManUtd.com

💬 @B_Fernandes8 and @StatmanDave discuss THAT counter-attack against Brighton in our latest episode of Box to Box, powered by @HCLTech ⚡

Watch the full episode on our website now 👉 https://t.co/9pXuIHjuAG#MUFC pic.twitter.com/XbuFwYMm8P