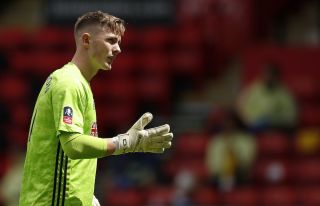 We are delighted with the news that Dean Henderson has signed a new long-term contract and is expected to fight for the No.1 spot at Manchester United.

It’s difficult not to have any concerns about United’s goalkeeping situation. Of course, we remain loyal to David de Gea but there were times last term when Sergio Romero should have stood in place of the Spaniard. Even just to take De Gea out of the spotlight.

Now, it’s time to wonder what this means for the Argentine because he won’t accept falling down another place in Solskjaer’s goalkeeping pecking order. Romero has been a great servant at Old Trafford and he could prove to be a quality addition for a top-flight side in search of a new stopper.

Although it would be a shame to lose Romero, United clearly have bigger fish to fry.

Henderson has signed a six-year deal with the Reds and will be the one to keep De Gea on his toes. Eventually the Englishman will replace what will be known as the old guard, if he can continue to perform like he did for Sheffield United on loan.

United fans on Twitter have had their say about the news surrounding Henderson.

Dean Henderson signing a new contract trending more than the new LB one blue club like that signed.😂😂😂😂#MUFC

Always said I think Dean Henderson should spend another year on loan, but if the lad is up for a fight with David De Gea to be the #MUFC No. 1, then you can only admire that. May the best GK prevail.

Dean Henderson signing that big contract will mean that David De Gea will be phased out. Man Utd will wanna get rid of De Gea because of his wages and replacing him with Henderson is the cheaper option. Every decision this football club makes is to save money. #MUFC #GlazersOut

Finally some good news for #MUFC in what’s so far been a shocking off season! Dean Henderson signing a long term contract shows he’s the future between the sticks! Now let’s give him a chance next season!

If only we could have as much squad depth throughout are team as we do with our goalkeepers – De Gea, D Henderson and Romero #MUFC

DEAN HENDERSON HAS SIGNED UP FOR 5 YEARS EXCELLENT NEWS #MUFC

Don’t get me wrong, it’s brilliant we’ve signed Henderson to a new 5-year deal. But one good season at Sheffield doesn’t make him THE No.1 at #MUFC.

De Gea is underfire, but he’s still the most experienced player at the club. Fully expect him to return to form in 20/21.