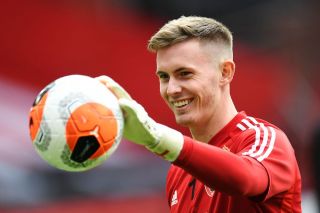 Dean Henderson has signed a new six-year contract with Manchester United and looks set to fight with David de Gea for the number one spot.

The deal will see the 23-year-old earn £120,000-a-week, as per Sky Sports, and makes him one of the best paid goalkeepers in world football. That shows how much Ole Gunnar Solskjaer and his staff rate Henderson who will keep De Gea on his toes.

Henderson is expected to be available to the manager next season rather than spend another campaign on loan after spending the past two terms on loan at Sheffield United.

Moreover, in the past 12 months he’s been one of the most outstanding keepers the top-flight has to offer.

The decision to invite Henderson to fight for his place was made easier after seeing De Gea make a number of errors during the 2019-20 season. As fans we’ll remain loyal to the Spaniard but he needs to pick up his form to he’ll end up on the bench.

Or will he? Sergio Romero is still at the club and has been seen as the league’s best second choice for some time. I’m surprised we’ve kept him happy this long with limited game time.