Manchester United have issued an official statement explaining their position regarding recruitment in this summer’s transfer window.

The third place finish achieved by Solskjaer and his players has given United the platform to accelerate their rebuild this summer with efficient business.

Domestic rivals Manchester City, Arsenal and Chelsea have all made signings so this summer but there is little indication United have made any progression in negotiations for a target.

Beyond the Pitch podcast host Phil Brown felt inclined to write an impassioned article detailing his frustration with the Glazer owners and Ed Woodward titled ‘Manchester United are being destroyed from within.’

United have since responded to Brown’s article with an email to the BTP network, explaining their stance on transfers during the coronavirus pandemic.

The club maintain that the Covid crisis has meant things are not simply ‘business as usual’ due to the huge economic impact, but insist they will back their manager in the long-term with recruitment of targets.

The response notes that ‘harsh economic realities’ mean United will be cautious to preserve the club’s strength during this unprecedented period.

‘Manchester United has been consistent in its position regarding recruitment since the start of the Covid crisis’:

Manchester United's official response on their current position regarding transfers this summer which they emailed to me earlier in response to an article I wrote. https://t.co/ar5H42KnBh 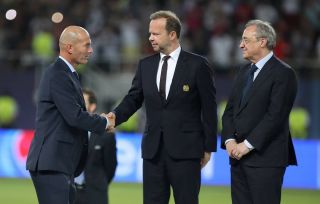