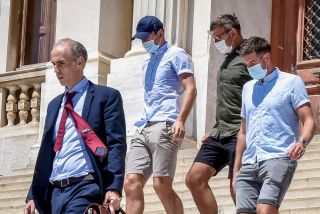 Even as a law abiding citizen I’m left scratching my head.

Harry Maguire was arrested in Greece last Thursday and less than a week later given a suspended prison sentence.

As per the Manchester Evening News, Maguire was found guilty swearing, resisting arrest, bribery and assaulting a police officer, while the Manchester United captain denies all charges.

This is not the sort of situation United want to be dealing with before the season starts but it is what it is, and we will all come away from it after learning a lot…

The Greek police have made a complete meal of this and are trying to save face, but a recent report from the BBC has brought it to a new level of stupidity.

They claim a member of the prosecution team has suggested the outcome of Maguire’s appeal will likely go in his favour if he simply says sorry.

So, after finding him guilty on all charges, all Harry Maguire needs to do is say one word. That being ‘sorry’.

I can see this one dragging on a few months.