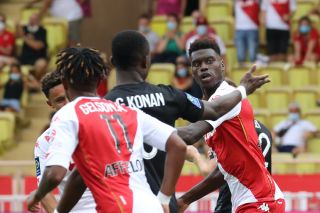 Manchester United have reportedly had a €25m bid for Benoit Badiashile rejected by AS Monaco.

The Red Devils are known to be in the market for a centre-back this summer, but the media has struggled to pinpoint who Ole Gunnar Solskjaer’s primary target for the job is…

Badiashile is one of the names reportedly on United’s shortlist of potential options and it sounds like we’ve at least made a move.

The Ligue 1 side are allegedly holding out for a bigger offer — along the lines of the money they received from United to sign Anthony Martial in 2015, according to French football writer Mohamed Bouhafsi.

A source close to Monaco now indicates that Badiashile will stay “unless Manchester make a Martial-like, unrefusable bid for him.” Bayer Leverkusen, who have been in talks to sign the player for weeks, intend to come back with a new offer regardless.

It appears United have stepped up their interest only to have their bid turned down.

No English newspapers have run the story but we’ll be keeping a close eye out for updates.

At the moment if you scanned through United related tweets on Twitter you would see a lot of toxicity with executive vice-chairman Ed Woodward, who a lot of fans are holding responsible for the lack of transfer activity. The problem, however, runs deeper than that as it’s the Glazers who are holding the club’s cash.

Supporters have been venting their frustrations and it looks like they will have to get used it.

For a club of United’s size, we look like we are struggling in the transfer market and it’s sad knowing that Solskjaer needs to be backed.

Update: The Daily Mail have rubbished this report saying United are not pursuing a deal for Badiashile.