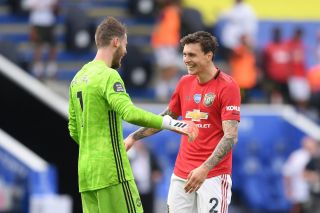 Swedish police have thanked Victor Lindelof after he helped stop a thief on Monday.

The Manchester United defender is currently enjoying some time off ahead of the new Premier League season.

And by enjoying some time off we mean fighting crime.

Swedish newspaper Aftonbladet reported the 26-year-old chased down a man who stole an elderly woman’s handbag in his home city of Vasteras. We can only presume Lindelof and his family returned to familiar surroundings rather than a Greek resort full of booze and trouble…

United have confirmed reports that it was Lindelof who chased the man before handing him over to the authorities were true.

The police said in a statement, cited by the Manchester Evening News: “A man who was in the vicinity is said to have run after the suspected perpetrator, caught up with him and held him until the police arrived at the scene.

“The police would like to take this opportunity to thank the witness for a quick and sensible intervention to restore the plaintiff’s property.”

If Lindelof can do the same next season when it comes to the leading strikers in the Premier League, we’ll be very happy but he deserves a major hat tip for this warm gesture in helping an elderly woman retrieve her possessions.

Had the thief got away she could have been left without her belongings forever.

Read more: Van Gaal slams Glazers and Ed Woodward for failing to get his top targets at Manchester United