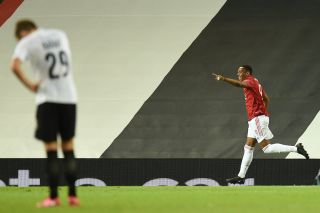 Anthony Martial could end up being a “world class” striker and solve our problems in front of goal; not that we’ve had many since the arrival of Bruno Fernandes in January.

Fernandes has made it easier for fellow attacking players at United to express themselves and Martial is one of the biggest stars to shine in helping the Reds force their way back into the Champions League.

Solskjaer made a big call before the beginning of the 2019-20 campaign when he made him United’s main focus point in attack following Romelu Lukaku’s departure.

A 23-goal return this past season supports the argument that Solskjaer should stick with Martial, and Pallister now believes that the Frenchman could prove to be a “sensational” asset at Old Trafford.

Speaking to Compare.bet, Pally said: “Yeah, he’s wanted to play there ever since he came to the club.

“To be quite honest with you, up until this season, he hasn’t looked like a striker, he’s been more of a threat coming from the wing. He’s not looked happy on occasion.

“Again, I’d put it down to being allowed freedom. We’re a team that looks forward now, a team that’s not scared anymore. He [Martial] looks a different player now.

“Maybe before, I would have said we were desperate for an out and out centre-forward — we brought [Odion] Ighalo in to do a short-term job and he did really well before the lockdown.

“If he [Martial] was still playing the way he did in previous seasons when he did play up front, I would have said we still need a centre-forward, but he’s come alive.

“He’s been sensational since the season has resumed. He’s scoring goals, he’s on the shoulder of defenders, making great runs, he’s got good ability on the ball to beat a man in the penalty box.

“If he continues that, all of a sudden we’re saying we’ve got a world-class centre-forward and that’s got to be a fantastic feeling for Ole.

“Whether it’s just the arrival of Bruno [Fernandes] that’s given him that belief that he can make that kind of run and be found in the box? Possibly. His body language is a lot better now.

“Ole was a fantastic striker and these lads must be eating up any knowledge he can impart. I think Martial has been our most consistent performer since lockdown ended.”