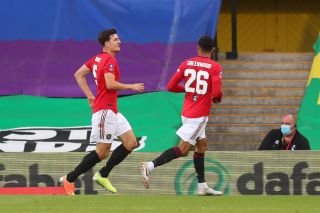 Harry Maguire has been included in Gareth Southgate’s England squad for next month’s Nations League matches against Iceland and Denmark despite his ongoing court case.

Maguire’s trial began in Greece on Tuesday after the Manchester United captain was arrested due to an altercation with police officers.

He was allowed to leave Greece to return to the UK after the alleged incident last Thursday evening and will now prepare for two England games ahead of the new campaign.

The 18-year-old netted 17 times in all competitions in the 19/20 season and will hope to emulate his goalscoring form on the international stage for the Three Lions.

England face Iceland in Reykjavik on Saturday 5 September before coming up against Denmark in Copenhagen three days later.

Here is your first #ThreeLions squad of the year! 🙌

Gareth Southgate has named a 24-man squad for next month’s #NationsLeague games against Iceland and Denmark.