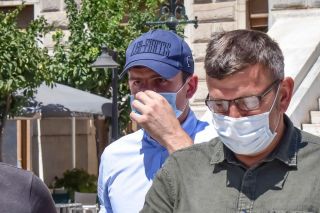 Harry Maguire’s brother Laurence has come to the staunch defence of the Manchester United captain after the prosecution’s case was detailed in Tuesday’s trial.

Maguire was arrested on holiday in Greece last Thursday evening after an altercation with local police, but was allowed to return home to the UK ahead of England’s upcoming Nations League matches against Iceland and Denmark.

As reported by Sky journalist Martha Kelner, the prosecution in Maguire’s case have alleged that he attempted to bribe police by saying,“I am the captain of Manchester United, I am very rich, I can give you money, I can pay you, please let us go.”

Laurence Maguire, a professional footballer for Chesterfield, completely dismissed this notion on twitter, stating the whole story is ‘fabricated’.

The United defender has pleaded not guilty to the allegations and completely denies accusations of wrong doing.

Maguire’s lawyer Alexis Anagnostakis says two Albanian men injected his sister Daisy with a substance on the night of his arrest.

The defence say that Maguire, his brother Joe and friend Chris Sharman planned to go to a nearby hospital after Daisy fainted from the injection.

Instead, the defence says that a driver took the trio to a police station where Maguire’s subsequent arrest occurred.

The defence also say Maguire was assaulted by officers with one telling him “your career is over”.

See Maguire’s brother Laurence’s reaction to the prosecution case below:

This is crazy… anyone who knows Harry now knows this whole story is fabricated 🙈 https://t.co/5XqotKI0pk