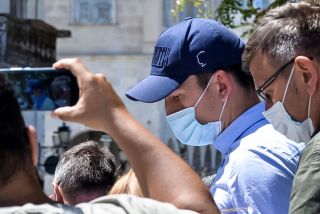 Harry Maguire has been found guilty at a court in Syros of aggravated assault, resisting arrest, and attempts of bribery, as per Sky News reporter Dan Roan.

The Manchester United captain, 27, was arrested after a clash on holiday last week.

Update: Maguire avoids prison and has been handed a 21 month and ten day sentence suspended for three years. He will appeal.

The bribery charges make me laugh — and Jamie Carragher gave the very reason why on Twitter earlier today — but they carry a maximum sentence of up to five years in jail and a fine which is very serious.

Absolute b******s! Every story/rumour someone tells about a footballer always starts with ‘Do you know who I am?’ I’ve never once heard any player say that!! https://t.co/m7jY4gDgHS

Maguire’s brother Joe Maguire and friend Chris Sharman were also arrested that night, but we have no information on what verdict they have got from the court hearing. None of the defendants were in court today and were represented by their legal team.

The Sun’s report suggests claims there is a video shot from outside Mykonos police station showing how the police “mistreated” Maguire, his brother and friend.

Moreover, the lawyer dismissed claims in the court, saying: “My clients did not beat anyone, accost anyone, or injure anyone.”

Maguire spent two nights in a cell with Joe and Chris before appearing before a court on Saturday in Syros. His sister was yesterday seen arriving back in England so there’s a chance they could be all home bound.

These people are trying their best to ruin Harry’s reputation & anyone who believes these lies are deluded.
Harry knew they knew exactly who he was as they repeatedly beat him moments before, shouting his football career is over & that he would never play again.
Makes me sick. https://t.co/9f4uHcfhBR

This is crazy… anyone who knows Harry now knows this whole story is fabricated 🙈 https://t.co/5XqotKI0pk

Absolute nonsense @HarryMaguire93 isn’t capable of such comments, simply cannot be true it’s just not in his nature. Nor is he capable of starting any type of physical fight he’s one of the nicest lads you could ever meet and some of the stuff being said is rubbish. https://t.co/cVDpqcEvfB

Maguire’s sentence will be delivered soon.