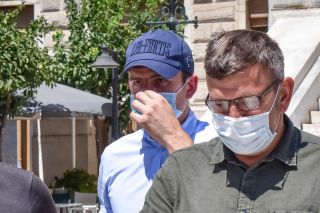 Gareth Southgate has named Harry Maguire in his England squad for the Nations League ties against Iceland and Denmark next month.

The defender is involved in court proceedings in Greece after being at the centre of a scandal since last Thursday night after he was arrested and later charged following a fracas outside a bar in Mykonos. He has denied all charges with Southgate sticking by his man by naming him in the most recent England squad.

Southgate had a difficult decision to make today. Maguire’s trial got under way in Greece this morning but the England manager made the right call.

He explained why Maguire has remained in the England squad, saying (via Manchester Evening News): “It’s clearly a decision that is not straightforward and a decision I could only take on the information I have.

“I’ve spoken to Harry. I have the insight to the story which is very different to what is being reported.

“You can only make decisions on facts you are aware of. If info changes down the line, I have to review that decision. I have a fantastic relationship with the boy. I’ve no reason to doubt what he’s telling me.”

If Maguire learns anything from this incident, it should be that as Manchester United captain he can’t holiday in popular resorts full of boozed up folk who know exactly who he is…

It’s a sad reality but some people go out to cause trouble and it’s a perfect scenario when they see a footballer who plays for United.

Maguire went from playing for Hull City and Leicester City to United.

I’m sure Ole Gunnar Solskjaer will have a word but I don’t think there was much wrongdoing on the defender’s part.