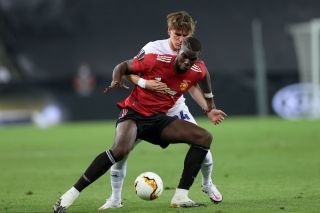 A few months ago this would have been a big story. Pogba missed most of the season with an ankle injury and required surgery, but neither the player or his agent would commit their future to Manchester United at the time.

Frustration was growing. This was a player United had spent a huge amount of money on but with little to show for it. That’s not entirely Pogba’s fault because how can he be to blame for years of poor recruitment?

Pogba came back into the fold after the Premier League’s restart as he helped Ole Gunnar Solskjaer’s side to a third-placed finish in the league. And now his agent Mino Raiola says United will not accept any bids for the player this summer.

He told Sky Sports Italy: “Pogba is a key player for Man United, they’ve an important project and he’s 100 per cent included.

“Man United will not accept any bid this summer to sell Pogba. We’re going to speak about a new contract soon, no stress…”

The quotes were also ran on Twitter by reliable journalist Fabrizio Romano.

Mino Raiola exclusive to @SkySport @DiMarzio: “Pogba is key player for Man Utd, they’ve an important project and he’s 100% included. Man Utd will not accept any bid on this summer to sell Pogba. We’re going to speak about a new contract soon, no stress…” 🔴 #MUFC #Pogba

Pogba’s current deal runs until next summer. Although it sounds like Raiola and Pogba are happy to renew terms at Old Trafford, I’m sure United will be wary of time not being on their side.