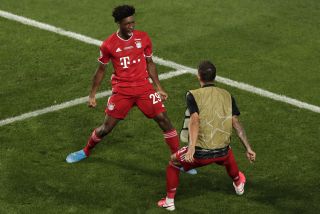 A number of Manchester United fans have called for the signing of Kingsley Coman after the Frenchman’s game-winning display for Bayern Munich in the Champions League final.

Remarkably, it was the Frenchman’s 20th trophy of his career. He was awarded the Man of the Match award against his boyhood club Paris Saint-Germain.

Last month The Athletic (£) reported that Coman is an alternative option for Manchester United if they continue to struggle negotiating with Borussia Dortmund over Jadon Sancho.

Although Sancho seems to be United’s prime target we are approaching the end of August without a single deal being done. If the struggle with Dortmund is preventing us from doing any business, Ed Woodward needs to act quickly to find an answer because Ole Gunnar Solskjaer requires a better squad next season.

After clinching third-place and getting United back into the Champions League, Solskjaer deserves a real chance as manager. It will be a disgrace if he starts the new season with pretty much the same players and no improvements.

Anyhow, here is how United fans have been reacting to Coman’s performance on Twitter:

I have always said that Coman was better than Sancho, Woodward sign him up! #mufc #PSGBayern

was happy with coman to united before but this seals it.
make it happen united

Kingsley Coman is right there for the taking, he wont get game time with Sane coming in… United, GET HIM NOW! #MUFC

If anything, this match showed why Manchester United should get Kingsley Coman even if we know his transfer value will surely rise. #UCLfinal