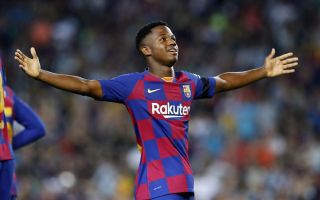 ‘Stalking’ is not a phrase you often see when it comes to transfer rumours, but the Catalan media have gone all out it seems.

Sport Witness, who brought the report to our attention, state that the media in Barcelona will not let go of the idea United are keen on Fati.

It’s dragged on for months but it seems a bit far-fetched to suggest a deal could happen when he looks like one of Barcelona’s biggest assets for the future. I would even go as far to say Fati has been the only saving grace of Barcelona’s miserable season.

Barcelona don’t believe the youngster wants to switch Camp Nou for any other destination, including Old Trafford, and they believe he will soon agree fresh terms on a new contract with a €400m buyout clause.

They will still likely have to fight to keep their teenage prodigy.

Fati mainly operates on the left but can play on the right also, which pretty much makes him an alternative to Jadon Sancho, who United have targeted this summer.

Mundo Deportivo claim Manchester United are willing to pay Fati’s €170m clause is hard to believe — but why would they dither at Sancho’s price tag? That makes very little sense to us.