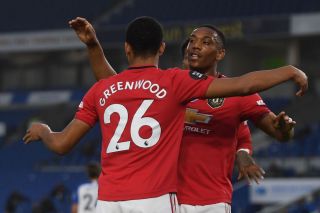 Greenwood enjoyed an outstanding breakthrough campaign, establishing himself as a first-team regular and earning wide recognition as a generational talent.

Ole Gunnar Solskjaer has described Greenwood as the most natural finisher at the club, and it’s clear to see why after he continued his fantastic goalscoring form for the senior side.

Greenwood scored 17 goals in all competitions in the 19/20 campaign, despite only truly becoming a first-team starter after the restart.

Martial, who enjoyed his best goalscoring season with a tally of 23 in all competitions, has lavished praise on the 18-year-old for his cutting edge when bearing down on goal.

“The thing that strikes me about Mason is how effective and clinical he is,” the Frenchman told the club’s official website.

“I get the feeling that whenever he shoots on goal, he scores!”

While Martial is a composed finisher, Greenwood’s ability to finish with both beet is largely unmatched in the Premier League.

Of course, the academy graduate has plenty to work on in the rest of his game, and he is perhaps not as effective in the right-forward position as he could be centrally.

But Solskjaer knows that in terms of raw finishing ability, Greenwood is a unique talent.

Greenwood made just 12 Premier League starts this season but we expect him to feature more heavily next season as he looks to accelerate his development.