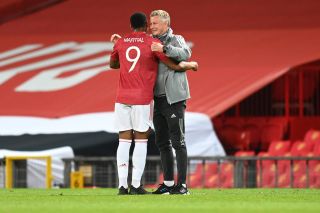 Anthony Martial believes his determination to repay the faith shown in him by Ole Gunnar Solskjaer inspired his best goalscoring season at Manchester United.

Martial thrived in the 2019/20 season, netting his best ever tally of 23 goals in all competitions despite missing an eight-week period through injury.

As well as his improved impressive goal tally, Martial also finished the season with the joint most assists along with Marcus Rashford.

Solskjaer has entrusted Martial to be United’s main centre-forward, something the Frenchman never experienced as he was often frozen out by previous manager Jose Mourinho.

And the 24-year-0ld believes that having the chance to strive for consistency is helping his goalscoring record.

“I think it’s down to the fact that I’ve enjoyed more game time. I’ve played in practically every game and so I think it’s all about consistency,” he told the club’s official website.

“In previous seasons I haven’t been able to feature as regularly; I’d be on the bench quite a bit and other times I’d be starting, which was quite difficult. Whereas right now I know that the coach has faith in me and I’m confident of starting the next match. So, I’m giving everything I can in order to pay back that trust he has shown.

“[I’m hungry for all goals] because for me, a goal is a goal. So simply by managing to score more of a simple kind of goal, I know that I’ll score a lot more in total. It’s something that we work on a lot in training and I then try and reproduce that in a match situation.”

In Solskjaer, Martial has a mentor who knows a thing or two about scoring ‘poacher’ goals and it is certainly a trait that he can add to his vast repertoire.

Martial’s ability to score incredible individual goals is clear, but he can increase his tally even further with the more ‘simple’ kind of goal that are synonymous with the Premier League’s most ruthless finishers such as Harry Kane.

He will have the chance to build on his best goalscoring campaign by leading the line again next season which begins in under a month.

READ MORE: Man Utd allow highly-rated youngster to leave on loan to League One side