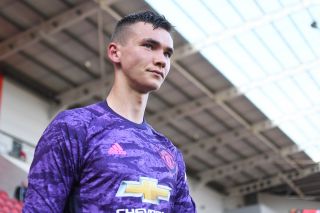 Manchester United are preparing a mass exodus of exits with plenty of highly-rated academy youngsters set for loan moves in this summer’s transfer window.

The Manchester Evening News reported this week that James Garner, Dylan Levitt, Ethan Galbraith, Di’Shon Bernard and Matej Kovar are all in line for temporary moves this summer as they look to accelerate their development with some first-team football.

And according to Sun journalist Alan Nixon, young goalkeeper Kovar is being allowed to leave on loan with a move to League One side Swindon Town imminent.

Man U. Letting young keeper Kovar go out on loan. Swindon about to snap up.

Kovar, 19, was named in Ole Gunnar Solskjaer’s extended squad for this season’s Europa League and is regarded very highly at Old Trafford.

He arrived at United from Czech side FC Slovacko in the 2019 January transfer window having impressed while on trial.

The Czech Republic youth international was United’s fourth choice ‘keeper last season after the loan exits of Dean Henderson and Joel Pereira. He made 11 appearances for Neil Wood’s Under-23’s in the Premier League 2 Division 2 before the season was curtailed early because of coronavirus.

We wish Matej the best of luck if he does indeed make the loan switch to Swindon this summer.