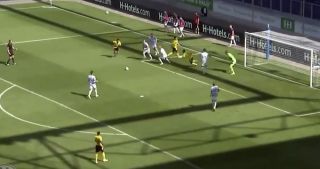 Borussia Dortmund’s Jadon Sancho has once again reminded the world why he is Manchester United’s number-one summer transfer target after he scored a superb goal in his side’s pre-season friendly earlier today which took four MSV Duisburg defenders out of the game.

The Black and Yellows took-on German third tier side MSV Duisburg earlier today in a pre-season friendly which saw the Bundesliga outfit cruise to a 5-1 victory.

The 20-year-old Englishman has once again stolen the headlines after he scored his side’s third in a goal which showcased his technical brilliance, a stark reminder of what Ole Gunnar Solskjaer could have at his disposal should the Red’s hierarchy stump up a cool £108m.