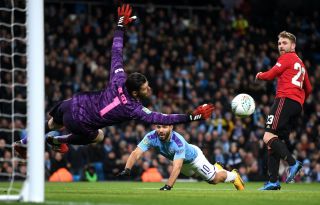 Manchester United have had goalkeepers David De Gea and Dean Henderson feature in the Premier League’s top five list of goalkeepers based on highest save percentage in the 2019-20 season.

United’s number-one De Gea is featured in the list alongside team-mate Henderson who has spent the last two years out on loan at Sheffield United but has recently returned to his parent club.

After what has been a long and hard campaign due to the ongoing COVID-19 pandemic, it’s nice to see some positive news, especially after a period of time which has seen Spanish international De Gea come under fire for a serious of mistakes, most notably in the FA Cup semi-final against Chelsea.

Elsewhere, 23-year-old Henderson who has spent the last two campaigns on loan with Chris Wilder’s Sheffield United has recently returned to United amid speculation he could be in line to offer number-one De Gea competition for the Red’s starting spot.

Having both De Gea and Henderson competiting for the spot in between the sticks may not be a bad thing for the Reds after both keepers feature in the Premier League’s top five keepers to have the highest save percentage, as per stat site Fbref.

*List compiled on keepers to have at least 10 starts.